Gustave Verbeek was a Japanese artist of Dutch extraction who reinvented an American art form. He was published in the bafflingly brilliant New York Herald comics section of the turn of the century, alongside folks like Richard Outcault and Winsor McCay. He was a committed adherent to Nonsense techniques — he liked to set impossible constraints for himself and try to wrestle coherent stories out them. He outpaced the Surrealists by twenty years, and devised his own mind-bending comic strip vernacular out of portmanteau, reversal & esoteric cartoon symbolism.

Take a look at this panel from his UPSIDE DOWNS strip.

A fish, an island, and a man in a canoe. Now flip it upside down… 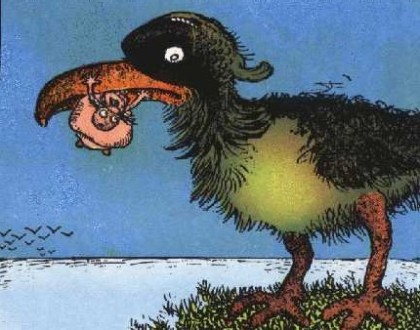 …and it’s a woman being eaten by a bird.

That’s how UPSIDE DOWNS works — six panel strips that read sequentially, which then flip upside down to become panels seven through twelve. The formal challenge of not just creating reversible images but creating images that reverse sequentially into a coherent story is absolutely insane.

Verbeek also created THE TERRORS OF THE TINY TADS, in which his bizarre visual games started with text: he created hybridized beasts out of combined words. Hippopotomobiles, hotelephants, pelicanoes and sweet potatoads capered across these charming nightmares.

Gustave Verbeek was a weird, fractured genius who invented a brand new language in which to tell stories and crack jokes. He would have fit right in to the Parisian salons of the 1920s. His work is gorgeously spotlighted in a elegant clothbound edition from Sunday Press.

He was a relic of a golden moment in the early 20th century when uniquely, almost inexplicably idiosyncratic talents could be seen in the pages of international newspapers, dancing gloriously to their own broken metronomes.

One thought on “The Upside Down World of Gustave Verbeek”