The book that brought Locust Moon together is coming back with a sequel! Once Upon a Time Machine began as a grassroots, pie-in-the-the-sky idea for an anthology by a bunch of folks trying to break into the industry (helped out by a few of our favorite artists, including Brandon Graham, Jill Thompson, Khoi Pham, & Todd Klein). It was picked up by Dark Horse and published as a big, beautiful, Harvey-nominated book – and inspired Chris, Josh, and I to keep doing whatever we could do to make more comics. That’s how Locust Moon Press was born. 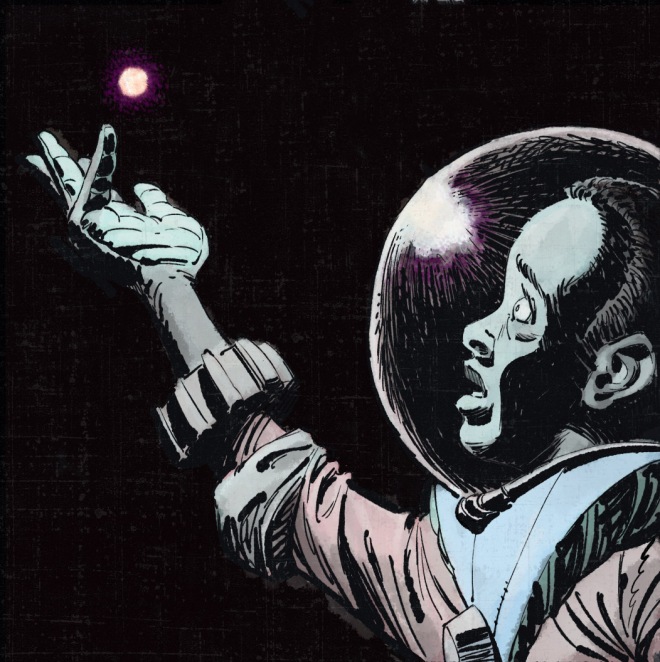 Now we’re working with Dark Horse again on Once Upon a Time Machine vol. 2 – and where the first book took us on a time-bending tour through world folklore and mythology, this second volume focuses on bringing one specific pantheon into the future: the Greek gods.

Gideon Kendall and I tackled the myth of the high-flying Icarus and his father Daedalus – whose future counterparts build a (titular) time machine and test the limits of discovery in a whole new way.

I won’t spoil it here, but I can’t help but mention that there is one particular page in this short story that marks my proudest moment in comics collaboration to date – I think Gideon and I were right on the same wavelength, and made something really special, particularly in that one moment.

Gideon Kendall is just a fantastic artist and storyteller, in case these few peeks aren’t enough to tell for yourself. If you want to see more of his work right away, check out his gross and wonderfully imaginative comic Whatzit.