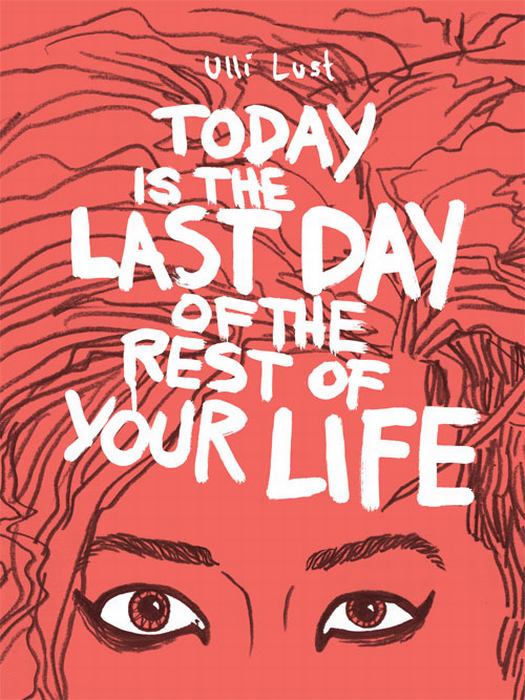 Weighing in at a brick-like, almost cubic 463 pages, Ulli Lust’s newly translated book TODAY IS THE LAST DAY OF THE REST OF YOUR LIFE is frighteningly heavy and lighter than air. Detailing the story of two seventeen-year-old Austrian punk girls on the run from nothing in particular, it has a you-are-there intensity and a lucid, judgeless gaze.

This memoir comic follows the author Ulli and her friend Edi as they travel aimlessly across Western Europe, thumbs out, hearts and legs open. They just wander down the road with no money in their pockets and not so much as a backpack or a change of clothes. They believe that their high spirits and good looks will buoy them as they float like corks on the waves, tossed from the city to the shore, through the Italian unknown.

The first thing that strikes you about Lust’s story is its matter-of-factness, its utter lack of manipulation. An early scene in which Ulli and Edi shave each other’s pubes to quell an outbreak of crabs is icky and funny and worrisome, but it isn’t played for gross-out comedy or finger-wagging moralism. You get the sense she’s just depicting the scene as best she remembers it. Jaime Hernandez’s back-cover blurb remarks on “the small details that create great character,” and Lust seems more interested in the odd, specific fragments of her recollection than she is in the heavy emotional moments of her story. She is at her best as a storyteller when Ulli tries to tear a piece off her t-shirt and tie it into a bikini bottom so she can go swimming, or learns how to beg for food in Italian restaurants, or when she’s sleeplessly itching her mosquito bites. These are the real moments of life on the road — not the adventures or destinations or sights but the tiny inconveniences, the tips taken and applied, the weird little experiences that separate the actuality from the travelogue.

Lust uses a two-color gestural looseness to achieve an impressively swift readablility, an extremely appealing and expressive style that never strains for effect. And though it was drawn based on journals twenty-some years after the events it depicts, it has the feel of comics drawn on the fly, the hungry roughness of work done on the road. She uses a kind of gestural cartoon naturalism, dropping in details as they serve the story. Her style is pitch-perfectly changeless over a sprawling page count, and the strength of that communication and consistency allows her to violate it, sliding into abstraction at will. These are comics as memory, and they’re drawn from the inside out. Ulli is weightless, feet inches off the ground as she soars up and down Rome’s Spanish Stairs; her face balloons with rage when she’s condescended to by a well-meaning woman; her skeleton is visible through her body, like a walking x-ray, when she’s at her most vulnerable. 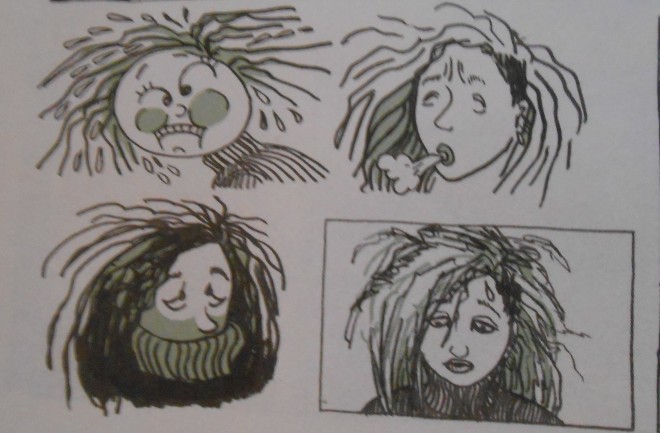 The theme of sexual violence becomes more prevalent as the story grows darker and more frightening, but it’s treated with such blithe acceptance that it desensitizes you. Ulli is infinitely, foolishly trusting, and will seemingly go anywhere with any man who promises a warm place to bunk down for the night. She’s repeatedly pressured into sex by what’s portrayed in the book as an Italian attitude that utterly normalizes sexual assault (any decent woman always says no), but she seems at first to regard it as no more than the cost of doing business. So when, against this background of quasi-consensual but utterly unappealing (and occasionally actively appealing but utterly disappointing) sex, she is violently raped — screaming, biting, struggling against this stranger who’s drawn as a featureless shadow-man against the darkness of her room — the effect is devastating. 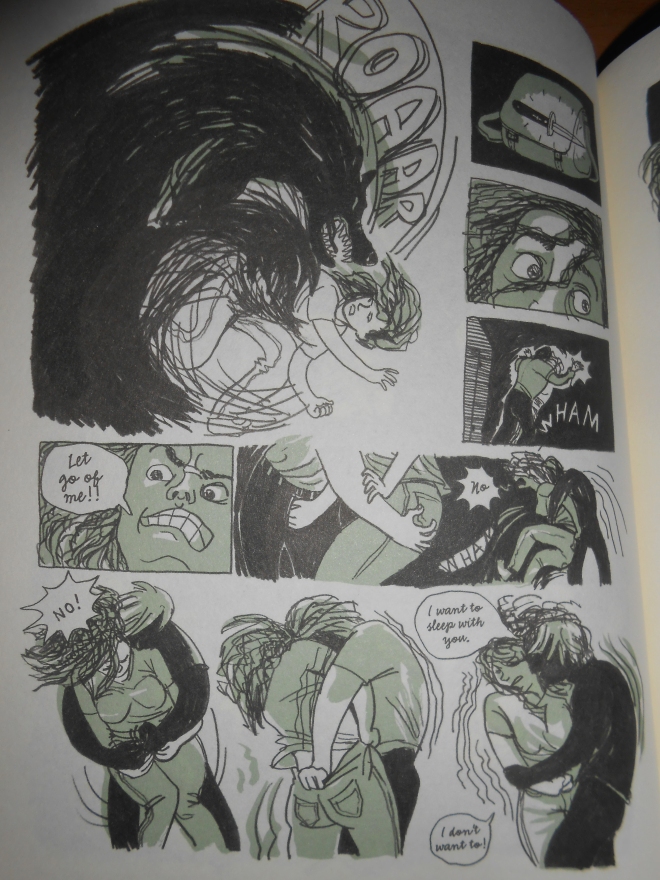 Her cartooning in the aftermath, the days following the attack, is heartbreakingly powerful. She draws herself as a translucent silhouette, moving along the fringes of a coastal town. In one astonishing three-panel sequence, she goes from a walking figure to an amorphous, huddled, human-ish shape before collapsing into four delicate, meaningless lines.

That act signals a tidal shift in the book. Despite — or because of — her trauma, she ends up falling for her rapist, spending what looks a lot like an idyllic weekend with him on the shore, though he encourages her to whore herself to local men. She soon leaves for Sicily (the relative safety of cosmopolitan Rome is played against the savagery of the more traditional South), but the shape of the story is changed. What began as a thrilling, high-spirited adventure journal with an undercurrent of danger and sexual violence becomes a fearsome, damaged howl, a catalogue of abuse, drugs and destitution, and a vicious, terrifying indictment of rape culture in Sicily and beyond. 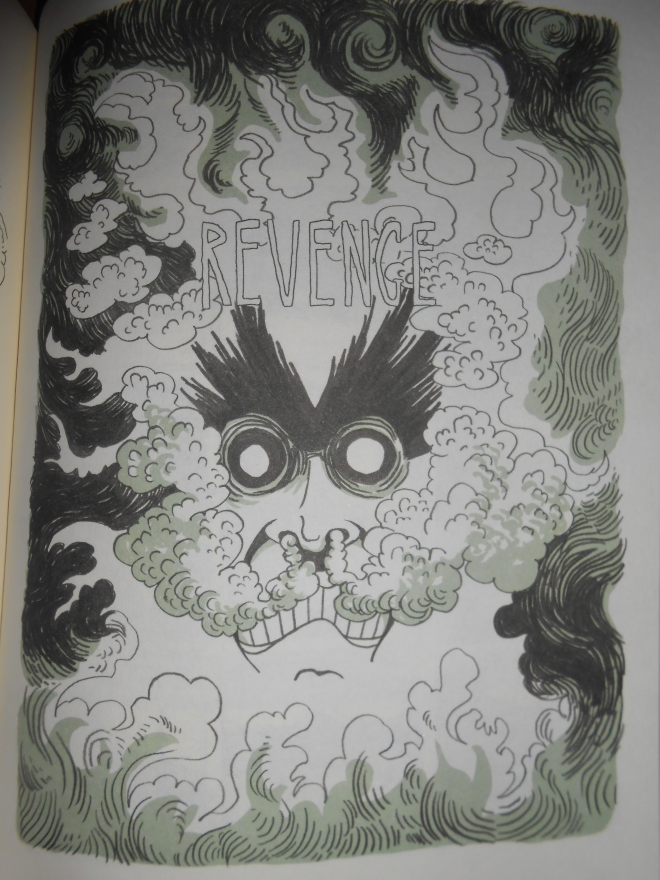 But Lust’s tone never really changes — her wide-eyed excitement fades, but her casual attitude and insistence on continuing the adventure persist. Now long separated from Edi, she is alone, a helpless lamb among Sicilian wolves, but she learns nothing: she still trusts everyone, though they all turn out to be monsters, and never once considers returning to the bourgeois safety of Vienna until it becomes a logistical necessity.

But even as the story darkens, begins to give itself over to brutality and addiction and betrayal, it never loses sight of the little observational shards of humanity that animated its first half, the interstitial pieces that are left out of most stories: the bummed cigarettes, the time-killing conversations, the little notebook she keeps of phrases useful for begging, her constant, sweet and hopeful seeking of other punks, as though anyone with a tattered shirt and a tattoo is her lifelong friend.

The events of the book constitute a non-stop assault on her dreamy innocence — the fact that she manages to mostly maintain it is both her most remarkable and her most infuriating characteristic. This version of Ulli Lust will always be frozen in motion as the wild young dynamo depicted here, shrieking with excitement in a thunderstorm, dancing to the Clash, leaping & flitting like a joyful spirit up & down the Spanish Stairs. Young, stupid, unbroken and beautiful.

That’s the brilliance and the frustration of this remarkable book: it refuses to make an argument. Though the book’s content is overwhelmingly focused on sexual violence, it never underlines any larger point. Ulli is going through a nightmarish itinerant existence as a homeless quasi-prostitute, and she never considers simply walking away. You never quite forget that this middle-class Austrian girl is making the choice to go through this horrifyingly degrading lifestyle to which so many women of another social status are doomed. The first time she knowingly sells her body it’s to a mournful older man who gives her her most satisfying sexual experience. He looks at her with sad, wet eyes, she thinks he has a beautiful cock, and they fuck with real passion. Her tenderest relationship is with the heroin junkie pimp who rents her out. He talks to her like a person, respects her boundaries, and helps her find her way to her first orgasm.

The back cover copy calls it a “coming-of-age narrative.” It’s no such thing. It’s a being-young narrative, with no distilled lessons or readable character arc. Lust is not writing as her forty-something self — she is cartooning from within her adolescent experiences. If you come to this book looking for the pleasures of memoir — the wisdom gained, the wry comment, the journey through pain and the hopeful way forward — you will be disappointed. So come to it with nothing — no expectation and no judgement. You will find the soul of a young woman, battered & foolish, kind & hopeful, ragged but not torn, pressed like a flower between its pages.