Imagine: you are a seventeen-year-old Annie Lennox, 1972. Listening to Ziggy Stardust with headphones plugged in to the hi-fi, alone with the songs, trying without luck to solve the seemingly insoluble mystery of what in the world this Spider from Mars is doing to you. Stuck in your shabby little teenage life, receiving this interstellar transmission that lays you open, hits you where you’re weak. You close your eyes and the music envelopes you. This little room in this worn down house, your bad haircut, your petty kid confusions — they all fade away and you are there in the bigger, scarier world from which this stuff is broadcast, this shadow dimension that feels realer to you than the mundane one in which you live. John, you’re only dancing.

Jump two decades, 1992. Here you are in London in your billowing dress and sequins, with your white-painted face and black-painted eyes in the visage of some dark goddess, having successfully climbed through the speakers into that other world, the one made of music and sex and voodoo, the one where this impossibly beautiful shape-shifting genius lives. He’s right here, Ziggy himself, Alladin Sane, the Thin White Duke in a pale green suit – you can see him, you can touch him, and even better you can sing with him. Not just any tune, but UNDER PRESSURE – this four-handed battering ram of a song, this song that doesn’t make sense at all unless its performers wield it as a weapon and try to burn each other down with hungry love. It’s a song that you have to try to win, and if it works its magic and the center holds you fight to a draw, close it out having laid everything on the line, Rocky and Apollo Creed clinging to each other, barely standing, spent – ain’t gonna be no rematch.

So here’s you, dizzy, drunk on impossibility, unsure sure how you got here in front of this sea of humanity, fronting Queen with David Bowie – you’re supposed to be paying tribute to Freddie Mercury, but for the moment it feels like you are Freddie Mercury, and didn’t he and Bowie fuck? Who knows what the rest of the night holds. You know one thing: you will give yourself to this performance, this moment, this song. You’ll get its blood under your fingernails. You’ll hang yourself from it like a cross, let it tear you limb from limb. You’ll sing it harder, louder that Mercury ever did, you will sing it better than the imponderable creature singing with you, this flesh & cheekbone godling with the mirrored eyes and lacquered hair – he’ll sing it like he always does, just like it sounds on the record, the consummate showman, his three decade career beyond its finest days, but damn if he doesn’t look ageless, good as ever, better even – he’ll sing it well but you’ll sing it like you’re trying to stave off execution.

And after the breakdown, with barely a moment to catch your breath, as the melody starts to build again to the shattering keen of its climax, you’ll let yourself get carried away: standing together on the lip of the stage you’ll wrap yourself around him, feeling his cool body and hot breath, his pulse barely elevated because he’s David Bowie, and what would it take in 1992 to make his heart race? You’ll push your face against his, feeling the softness of his skin, his fresh shave — he is human, after all, not an ambisexual android, not the man who fell to earth, just some person of impeccable vision, a dreamer who built a better myth, newer, sleeker, that turned on multitudes, multitudes which include you. And you’ll pull yourself closer to his body, constricting on him as tightly and ferociously as you’ve splayed yourself out across this song.

It’s erotic to be sure – your lip-quivering longing as you touch him with your mouth, push your space-face close to his – but it’s bigger and wider than lust, it’s wishful identification and hero worship and ego and sorcery and transcendence, that whole larger than life rock & roll current burning through you. It’s an erection of the heart. You want to fuck him, of course, that goes without saying — but what you really want to do is combine with him in violent harmony, your claws in each others’ hearts as reality comes crashing down around you in some kind of metaphysical orgasm, little death made huge, two perfect post-gender geniuses locked in an Ouroboros of art and fame and sex and myth and music.

You push in, closer and closer, your eyes closed, as dreamy as they were listening to Ziggy on the floor of that boring teenage house. You let the song, this perfect song, carry you, your lips moving ever nearer to his but never touching, some tantric proof of Zeno’s paradox, your heart hammering, your voice swinging every note like a haymaker, your eyes tight as he keeps his gaze set dead on the crowd, the perfect performer, deflecting every gaze, shining back the light shone on him brighter and hotter. Happily withholding everything, so utterly comfortable with his role as a totem, an object of painful longing and unmanageable desire, from you, from the crowd, from the world. Enjoying your perfect love but betraying nothing, letting your pure incendiary thirst hang hopefully in the air. Until the note ends and with a sly smile he steps away, finally looking at you, snapping his fingers, and the greatest moment of your life is over.

Or maybe your heart can’t handle that kind of thunder. So forget Annie Lennox, try this one on: you are me in 2014. A fledgling comic publisher and retailer with a career that’s half imaginary, no book that’s done any big sales, no money, no business plan to speak of, just a lot of love and partners who constantly inspire you and an unshakeable desire to make comics even though you don’t really know how and can’t draw, a fixation that you don’t entirely understand but you know stems from the fact that comics did something to you when you were a kid, worked some kind of strange magic and you never shook it off so now you’re stuck in this fucked up industry with no idea what you’re doing, with nothing on your side but this pure want.

And you and your dudes wind up concocting this tribute to Winsor McCay, who is your favorite cartoonist of all time (tied with Bill Watterson), start pitching it to people and suddenly the thing takes on a life of its own and the lineup of contributors reads like a list of the people whose work you admire most, some of them the actual ones who enchanted you in those formative, bad haircut, transmission-from-another-planet years.

All these pages start pouring in and they’re so wild, so massively ambitious, just full of sublime desperate passion, all these brilliant people from the top to the bottom of the comic industry breaking their backs, working fingers to the bone, drilling deep into the wellsprings of their vision, creating these glorious strips that look back with gratitude and forward with hope, dancing across the huge, forgotten expanse of this broadsheet page, pushing comics to their very limit.

And as the whole beautiful thing begins swimming into focus it starts to feel like you’re spending your days in conversation with the dreamer himself, this titan who died eighty years ago, and it feels like he’s listening. Talking back to you. It feels like you reached through the page somehow, these magical pages that ravaged your mind, that infiltrated your dreams, that became a central part of your understanding of the world and yourself, of your fantasies and nightmares. It feels like you read so hard, and loved so much, that a doorway opened, and even if you could only poke your head in for a second you could feel the soft Slumberland sun on your face, taste peppermint on the wind. You’re doing it not by talent, not your own at least, but by lighting a beacon, finding remarkable people who love what you love and bringing them together. And it turns out, for fleeting moments, that yes Virginia, love is as potent as money, as strength, as power.

You press your face against it and it dances away. All you get is a taste – it can’t ever be yours. But goddamn, Annie, thanks for the reminder: if you ever get a chance to sing with David Bowie or build your own Slumberland, you better not fuck it up.

Nathan Fox and Sheila Keenan’s heart-wrenching, half-century-spanning tale of soldiers and soldiers’ best friends is old-fashioned in its storytelling and forward-looking in its gorgeously sleek illustration.

It is… unsettling how funny we find these inexplicable and off-kilter comic strips.

37. TURMOIL IN THE TOYBOX

7 and 1/2 minutes of the gospel truth. The toys, comics, cartoons, and games of the ’80s turned our entire generation into satanists. Watch this as you perform your daily sacrifice.

One of the finest stories Marvel Comics has ever told is back in print. Jae Lee and Paul Jenkins explored the artful outskirts of what is possible in a superhero comic. 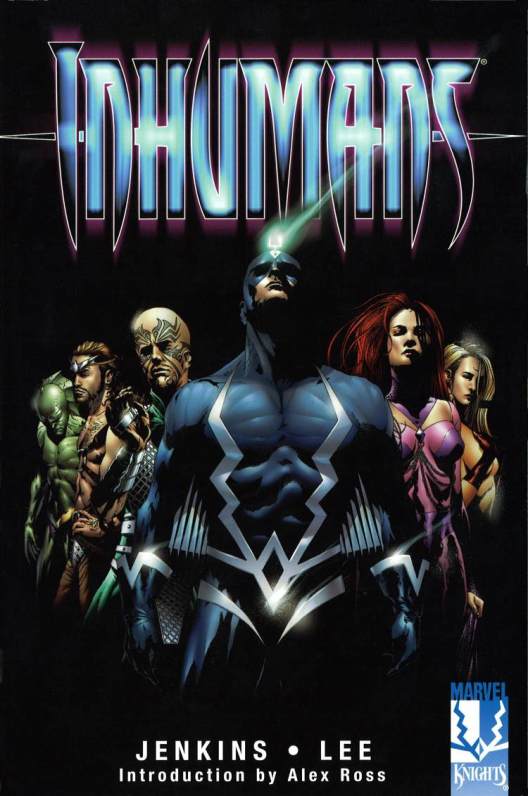 Chuck Forsman’s dark, opaquely frightening story of two broken young people on the run plays like a Gus Van Sant version of BADLANDS. It gets under your skin.

END_OF_DOCUMENT_TOKEN_TO_BE_REPLACED

40. Copra Compendium
It’s finally here, courtesy of Bergen St. Comics. With a voice all his own Fiffe swipes liberally from Miller & Kirby, then high-tails it for the border. 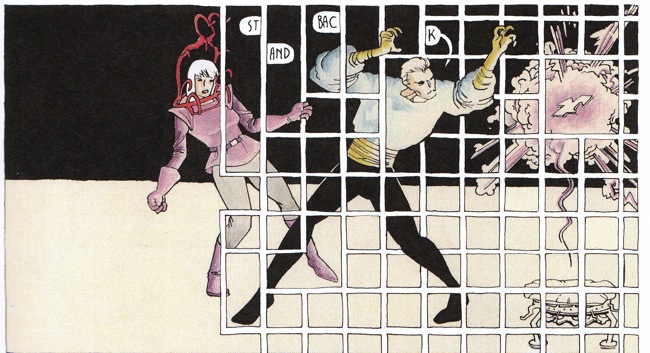 39. Electric Light Orchestra
If there’s a better album to make comics to than ELO’s NEW WORLD RECORD, please tell me about it.

38. This Commencement Speech by Joss Whedon
Because YOU HAVE ALREADY BEGUN TO DIE.

37. Poutine
When this stuff finally breaks in the states, dozens of organic locally-sourced poutineries will start popping up all over Williamsburg & Silverlake.

36. Inky
We got a new cat. He’s a little monster, but also a kitten so we are legally and morally obligated to love him.