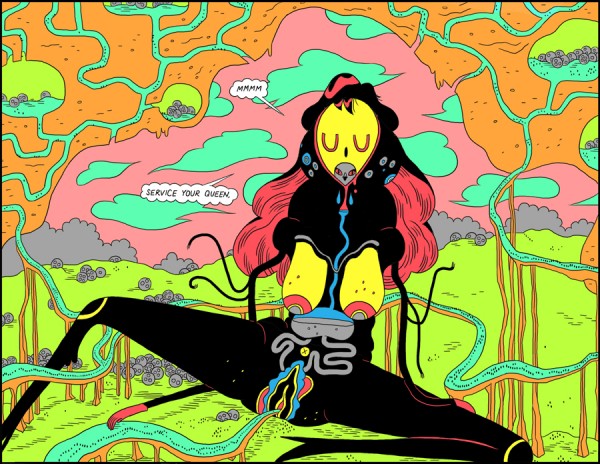 Michael DeForge’s ANT COLONY is a wonderfully whole piece of comics craftsmanship. Externally baffling but internally consistent, it does what great art comics often do – it teaches you how to read it. Best experienced in a single reading, it’s a book that you swim through. And by the time you reach the far shore, gasping for air, you’re tempted to return to the beginning and dive back in. Not because it was such a pleasurable reading experience, but because you’ve only just absorbed its language. Now that it’s over, you’re finally ready for it.

It begins with a statement of ennui that’s at once existentially universal and hilariously particular. It’s like the setup of a joke: two ants stand on a decomposing apple, and one asks the other, “Why does everything have to be so tiny?”

“I’m just so sick of this itty-bitty lifestyle,” he goes on. Most of us can relate – who hasn’t anxiously pondered their own insignificance? – but there’s something disorientingly funny about watching an ant’s spiritual crisis as he discovers his own puniness. It gives us a God’s-eye-view while speaking directly to our experience. We’re drawn in and held at bay, watching the ant farm and staring out from behind the glass. 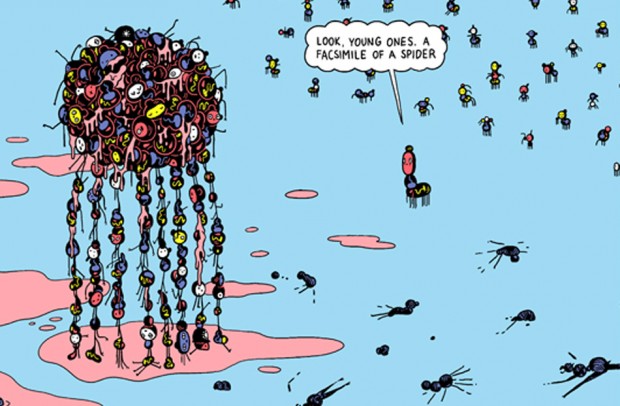 That seems to be DeForge’s great trick in this disturbing, uncomfortable opus of a graphic novel, and it forms a tension that never slackens. We’re introduced to a large cast of ants and other bugs in a detailed, surreal insect world. We’re given so much to identify with, so much that’s recognizably human – the dissatisfaction and intractable misunderstandings of a squabbling couple; a child dealing with his abusive, mentally ill father; ants sitting on couches, watching TV, bitching at one another. But there is also so much that is strange, repulsive, and unknowable – the boy who inhales a cloud of microscopic earthworms and is transformed by them; the spiders with the heads of Tex Avery wolves, who copulate by extending worm-like appendages into one another’s bodies; the queen, drawn like some byzantine flat-perspective centerfold, her legs spread as she’s rotting and dying. The book invites our identification, then rejects it. It gives us recognizable figures in an alien world – one as frightening and foreign as (if not particularly similar to) the insect kingdom itself.

Though there are a lot of strange pleasures to be had here for the reader who enjoys this sort of thing – morbid comedy abounds, DeForge’s linework and design sensibility are inimitably striking, and the bold color choices are directly appealing – ANT COLONY is at its core a very dark, ugly book. DeForge creates situations in which we expect the drama of human connection – a couple divided by war; five runaways trying to find or build a home; an orphaned child, rescued and raised by enemy combatants – but instead gives us amoral coldness. In one typical exchange, one ant says, “What are you doing? Why are you trying to drown that baby?” and his boyfriend replies, “I dunno.” There is a lot of murder and death in this story, none of them crimes of passion – they’re all committed with a casual shrug, as a procedural necessity or a way to fend off boredom. These ants seem to kill each other the same way we kill them – absentmindedly, and sometimes for no reason at all.

The exception is that one ant from the opening, the one bemoaning his itty-bitty stature. He seems to feel in a recognizably human way. He meditates, declares himself a pacifist, and refuses to take part in the war with the red ants. He reaches out for his boyfriend, who’s never anything but surly and aggressive. When he and four other ants go on the run, he tells them that they’re a family now. Watching his constant (sometimes pathetically needy) attempts to engage emotionally as they’re met by the pure autistic insectoid impassivity of the characters around him is the most affecting element of the book, its emotional core. But don’t mistake him for a point of view character – DeForge’s storytelling here has a blank, loveless gaze. Though often hilariously funny, his point of view is algid and bleak.

Last week I reviewed Drawn & Quarterly’s translated edition of BEAUTIFUL DARKNESS by Fabien Vehlmann and Kerascoet; these two books make excellent companion pieces, if you enjoy being ushered by stellar cartoonists into the heart of teeny-tiny sociopathy. But there is a key difference: while both are frightening and morbid books, the reading experiences diverge. BEAUTIFUL DARKNESS, for all its existential snarl, enraptures you with beauty and cuteness, begging you to offer up your heart for it to devour. It fills you with rage and hurt. ANT COLONY, meanwhile, has a flat affect and implacable presence. Both stories sweep you through carefully designed, grimly vicious universes, baffling nightmares where nothing vulnerable is safe, and where weakness is death. The difference is that BEAUTIFUL DARKNESS is a tragedy, and ANT COLONY thinks that shit is funny. 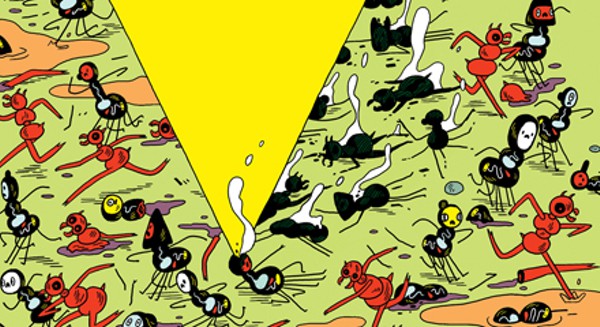 With an intriguing premise from Steve Orlando and moody, expressive artwork from Artyom Trakhanov, we can’t wait to see where this new Image title takes us.

Following Hawkeye’s mix of humor, character-driven realism, and gleeful formal experimentation, SUPERIOR FOES OF SPIDER-MAN has quietly become one of Marvel’s very best books. Don’t let the secret out, but it almost seems like somebody over at the House of Ideas got it in their head that superhero comics are supposed to be fun… 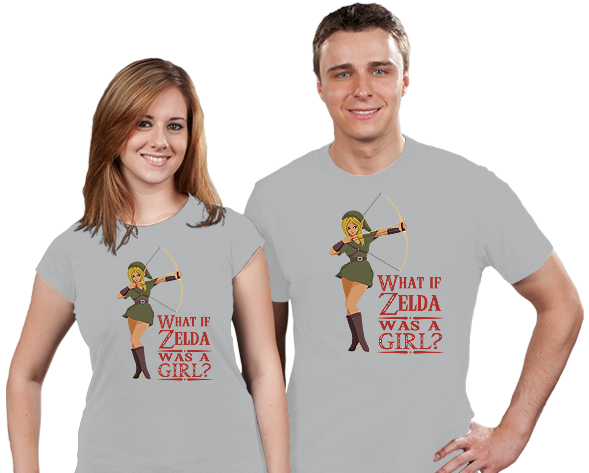 We detect some of the spirit of Winsor McCay in Paul Kirchner’s quietly masterful surrealist comic strip.

We were pleased to play host to Greg Benton and his huge, beautiful nightmare of a graphic novel. Greg is one of our favorite cartoonists and one of comics’ most righteous dudes, and we can’t wait to see what he does next.

True to its title, this new alt-zine style anthology series feels like a submersion in the creepy, underfoot world.

Baseball beckons, and with it a world made new.

END_OF_DOCUMENT_TOKEN_TO_BE_REPLACED

trillium #6 : this series is going to make for a great evergreen once it’s done. a huge heart, compelling story, and killer cartooning & atmosphere from jeff lemire and josé villarrubia.

red light properties : haunted real estate and tasty storytelling chops, courtesy of dan goldman. one of the more interesting books to come out in a while. 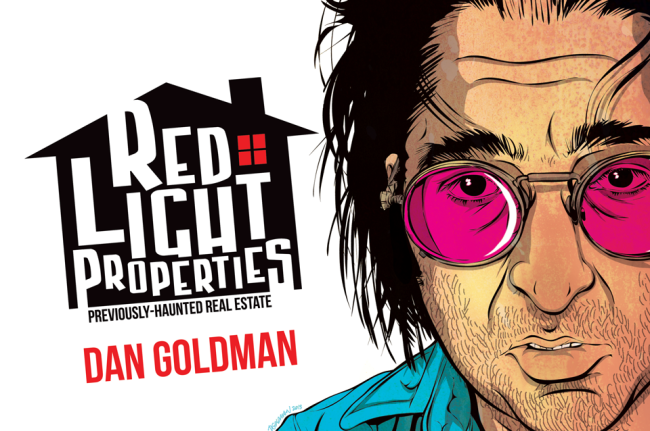 ant colony : michael deforge seems like he was born speaking comics instead of english, his first words a 9 panel grid. then, as he grew up, the language became one that’s all his own. come hear him speak it next wednesday.

the fox #4 : dean haspiel is pouring a ton of fun into this comic, and his clean, poppy art is worth the price of admission on its own. 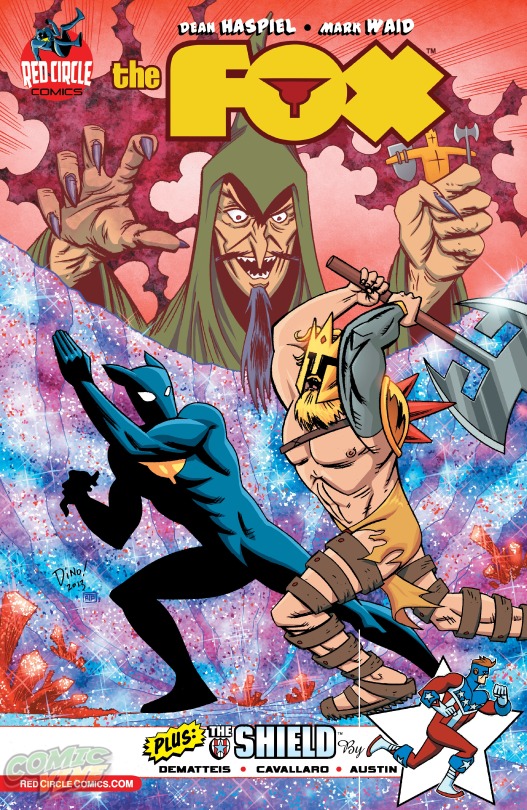 On Wednesday, February 12th, Locust Moon will be hosting the launch of Michael DeForge’s darkly existential graphic novel Ant Colony. In just a few short years, DeForge’s singular, idiosyncratic style has made him one of the most exciting new voices in alternative comics. Here, he will present a slideshow with a reception to follow. Drinx, snax & comix.

Ant Colony follows the denizens of a black ant colony under attack from the nearby red ants: from its opening pages, DeForge immerses the reader in a world of false prophets, unjust wars, and corrupt police officers. On the surface, Ant Colony tells the story of this war, the destruction of a civilization, and the ants’ all-too-familiar desire to rebuild. Underneath, though, Ant Colony plumbs the deepest human concerns – loneliness, faith, love, apathy, and more. DeForge’s striking visual sensibility – stark lines, dramatic color choices, and brilliant use of page and panel space – stands out in this volume.